This fall, staff at two Snoqualmie Valley schools – Opstad Elementary School (OES) and Twin Falls Middle School (TFMS) – took special care to safeguard students when the Sallal Water Association issued a Boil Water Advisory for North Bend neighborhoods where the schools are located.  From September 18 to October 7, precautions taken by the district’s Food Services and Operations teams, in particular, which allowed the schools to remain open and able to continue serving students safely.

At the November 21 School Board meeting, Superintendent Rob Manahan and the Board of Directors expressed their gratitude to the following staff who went above and beyond their regular service to ensure safe environments at TFMS and OES, during this unusual situation. Special thanks to: 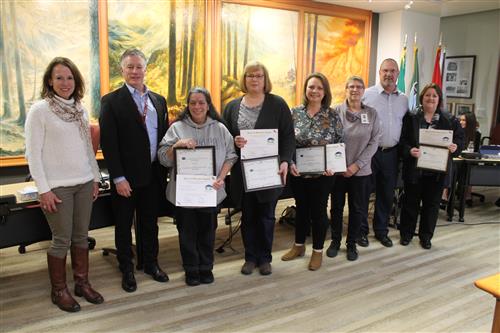 -- thanking them for their resourcefulness and service when facing a water challenge.

The Food Services teams at Opstad and Twin Falls worked closely with the health department to implement procedures that would ensure food safety while still serving nutritious meals.  For meal preparation, they pre-boiled all water needed for food preparation and handwashing dishes, used bottled water for handwashing and drinking, and replaced washable trays and utensils with disposable ones.  They also altered their menus to minimize items that required washing, offering pre-packaged, individually wrapped items instead.

SVSD Food Services recently received a Class Act Award -- for their dedication and overcoming obstacles in order to ensure students were well fed -- from ChartwellsK12, which provides our district’s school dining services. They were selected for this special monthly award, from over 85 school districts and 1,500 schools that comprise Chartwells’ western region, explained Chartwells District Manager John Maupin. 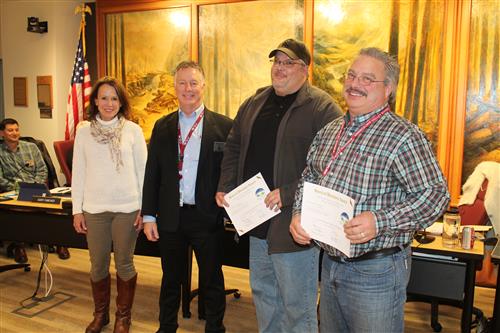 for their support in keeping our schools safe and well stocked with bottled drinking water.

The Operations team, upon learning of the alert, responded quickly with a plan to cover all water fountains throughout the schools, and add signage to all sinks to prohibit drinking from school faucets.  They purchased and delivered bottled water to both schools, and kept them well stocked during the incident which lasted over two weeks. Once Sallal verified its water was safe and lifted the alert, operations staff initiated appropriate steps to flush the pipes thoroughly at both schools before resuming water service.

“Safeway on the Ridge and QFC in North Bend also were great to work with,” added Davis. We appreciate that the stores helped ensure ample water shipments were set aside for our schools.