On Tuesday morning, March 19, C-SPAN representatives from Washington DC visited Mount Si High School, along with a reporesentative from Comcast, to present the award to the student directors during their Film Production class.  In addition, Mount Si students had the opportunity to tour a special C-SPAN bus that has been touring the nation with interactive exhibits for students. (See photos below.)

"This recognition is impressive when you consider there were more than 1,800 entries from over 3,700 students participating across the country," explained Mount Si Digital Media teacher Joe Dockery. The Mount Si High School film was one of only two documentaries selected for recognition from Washington State.

In this year's contest, C-SPAN invited students in middle school (grades 6-8) and high school (grades 9-12) to create short documentary films to answer the question, "What's the most important issue the president should consider in 2013?"

A total of 75 award-winning videos were selected recognized by the C-SPAN Education Foundation. Videos were evaluated by a panel of educators and C-SPAN representatives based on the thoughtful examination of the competition's theme, quality of expression, inclusion of varying sides of the documentary's topic, and effective incorporation of C-SPAN programming. Students worked in teams or as individuals to address a wide range of public policy issues, from bullying to troop withdrawal to the national debt. To view all the 2013 winning videos or for more information about the C-SPAN contest, visit: www.c-span.org/studentcam. 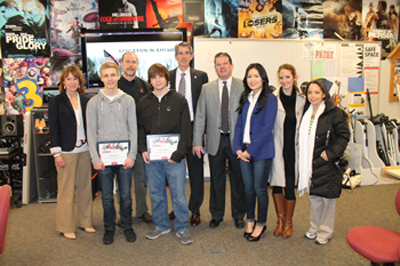 Aboard the C-SPAN Bus, visitors learn about the following programming and resources via interactive technology:

One student commented, "Whoa, Why can't our buses be like this?"