Elementary History Teacher of the Year Honored at SES

Congratulations to Snoqualmie Elementary School 5th Grade Teacher Cynthia Hodgins who has been named the 2015 Elementary History Teacher of the Year by The Freedom Trail Historical Society and The Paul Revere House Historical Society. Hodgins was selected from over 5,000 nominations across the nation.
“The thing that I admire the most about Mrs. Hodgins is that she finds a place for meaningful history lessons, that leaves students with lasting memories,” explained school volunteer Lynn “Aunt Lynnie” Kehoe who nominated Hodgins for the award. Some of her teaching activities include a detailed timeline of American History that runs the perimeter of her classroom and hosting a Colonial Tea event each February in which students and parents are invited to wear colonial costumes and sample goodies served in the 1700’s. Today, we discovered Mrs. Hodgins dressed in a colonial costume while her class was recognizing Patriot’s Day, a civic holiday that commemorates the anniversary of the Battles of Lexington and Concord, the first battles of the American Revolutionary War on April 19, 1775. (Not to be confused with “Patriot Day” which is observed each September 11 to remember those killed in the 2001 attacks.) 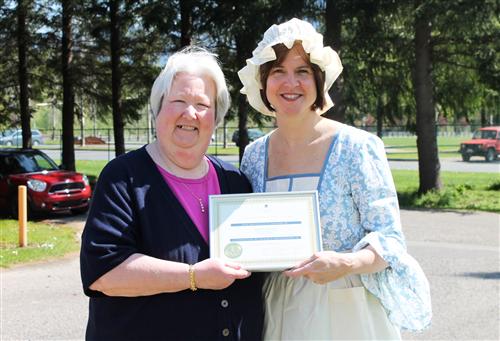