To prepare for the expansion from five to six elementary schools in the fall of 2016, an Attendance Boundary Review Process has been underway the last several weeks. During this process, the committee also considered options for future middle school attendance boundaries when the District returns to three middle schools in the fall of 2019. Public meetings were held on October 20 and 21 to share information, answer questions and collect community feedback about the proposed attendance boundaries. In addition, two online surveys were administered to gather feedback on options under consideration. Hundreds of comments were received by the committee, and many factors were taken into account in developing the final recommendation. Elementary Attendance Boundary Recommendation: Starting Fall 2016
The Attendance Boundary Review Committee has now completed its study and analysis of school attendance boundaries. After careful consideration, the committee has recommended Option B2 to the Superintendent -- for the new elementary attendance boundaries that would take effect the fall of 2016. 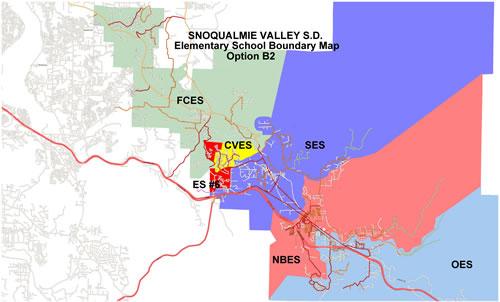 See the map of Option B2 (above); to zoom in on the map, click on the image. Also, a brief description of proposed changes from the current attendance boundaries is below:
The committee is also recommending that next year’s fifth grade students (now attending fourth grade) be allowed to continue enrollment in their current schools for the 2016-17 school year, if they choose. Siblings of those next year fifth graders would also be allowed to continue at their current school for one year only. Parents who request this option will be responsible for providing transportation for the 2016-17 school year for their “grandfathered” students.
Future Middle School Attendance Boundary Recommendation: Starting Fall 2019
In the fall of 2019, all freshman students in the Snoqualmie Valley School District will move into the newly rebuilt Mount Si High School, along with other students in grades 10-12. This transition will allow the District to convert the Freshman Campus back into Snoqualmie Middle School, returning to a three-middle-school model (instead of two currently). By then, with a total of six elementary and three middle schools, the District is planning for a scenario that involves two elementary schools “feeding” into each middle school. The Attendance Boundary Review Committee has been studying this and has recommended the following middle school boundary changes to the Superintendent to begin in the fall of 2019:
Next steps:
The recommendations on attendance boundaries will be presented at the October 29 School Board meeting, which takes place at the City of Snoqualmie Council Chambers (38624 SE River Street, Snoqualmie, Washington 98065) at 6:30 p.m. After the presentation, there will be an opportunity for citizen comment on the recommendations during the meeting. For those who could attend the October 29 School Board meeting, Survey #3 was available online until November 3 at noon, to provide input directly to the School Board.
The School Board is scheduled to take action on the recommendations at a special meeting planned for Wednesday, November 4.  The meeting will begin at 6 p.m. at the Snoqualmie City Hall.  Their final decision will be posted online November 5.
Copyright © 2002-2022 Blackboard, Inc. All rights reserved.